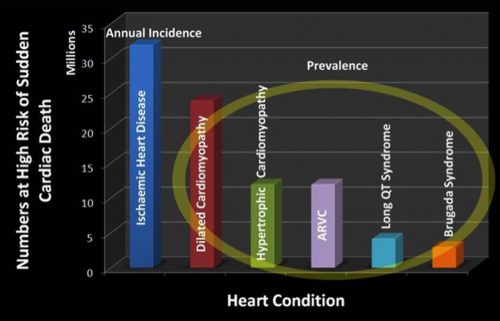 3 million people die annually of sudden cardiac death – 100,000 in the UK alone.  These deaths could be prevented with a device called an Implantable Cardioverter Defibrillator (ICD), inserted during a minor operation.

However, it is very difficult to work out who needs an ICD because current risk markers for sudden cardiac death are limited.  This has led NICE (National Institute for health and Care Excellence) to call for research into new risk markers.

LifeMap has additionally been shown to precisely assess need for ICD in patients with all of these conditions.

LifeMap diagnostics is based in Leicester, UK and includes a team of researchers and clinicians.

LifeMap is a quick, minimally invasive test that has been shown to precisely assess risk of sudden cardiac death.

LifeMap has won numerous awards and Research Grants because of its novelty and efficacy.

LifeMap has been detailed in 3 peer reviewed published studies with further publications being finalised.